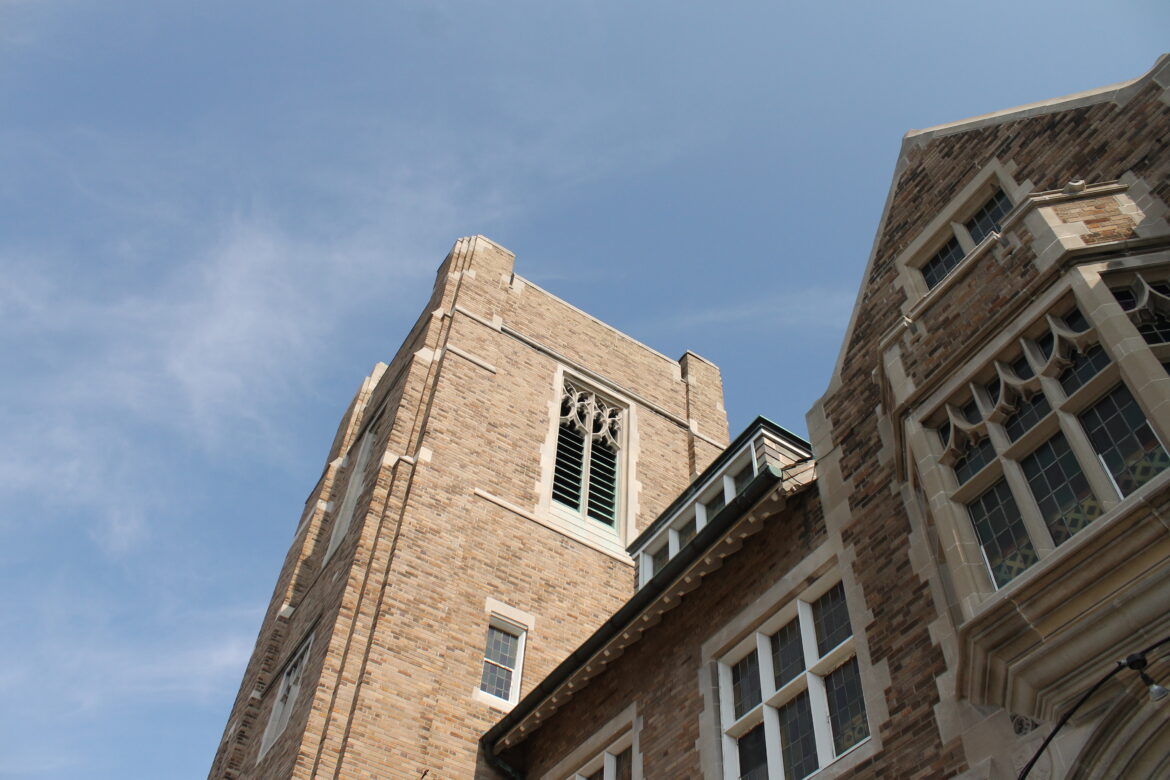 Peoples Church has found itself in the middle of a lot of redevelopment, and that means the loss of a lot of public surface parking nearby.

Long-awaited infrastructure improvements near Valley Court Park appear set to happen after years of delays, now that Council has approved spending up to $1.6 million and hiring Sandborn Construction for the work. But leaders of Peoples Church aren’t happy with what it will mean for their needs.

Nine bids were received on the project, ranging from Sandborn’s lowest bid of about $1.3 million to a high of almost $2 million. DPW recommended accepting Sandborn’s bid and including a contingency of about $300,000; hence Council’s approval of $1.6 million for the project.

As part of the project, a block-long section of Evergreen Avenue, from Valley Court Drive to Albert Avenue, will be torn up. According to Nicole McPherson, East Lansing’s Deputy Director of Public Works, “this section of Evergreen Avenue will have a pedestrian walkway on it and the remainder will be grass. The City does not intend on putting a roadway back in this area.”

Additionally, Albert Avenue will finally reach all the way west to meet Valley Court Drive., instead of drivers having to take an awkward cut through parking lot #8 to get there. The new Albert Avenue will feature dedicated bike lanes in both directions.

All of that will mean better sewage and water flow and hopefully better and safer traffic flow, too. As a bonus, turning that section of Evergreen Avenue into a greenway should discourage traffic from cutting up into the Oakwood Historic Neighborhood, a long-time concern for homeowners there.

East Lansing’s Department of Public Works (DPW) has wanted these changes for years — especially the sewer improvement, which will help with flow on the east side of the Oakwood neighborhood and with big new development in the area.

Uncertainty around what would be built where has led to lots of holding-off.

On the west side of the block of Evergreen Avenue scheduled to become a greenway, DRW Convexity has approval (and a legal obligation) to construct a new affordable-housing apartment building. On the east side of that block are the DDA’s “Evergreen Properties,” the fate of which are still up in the air, although an office building is in the conceptual stage from River Caddis Development.

At the Nov. 10 meeting where Council unanimously approved the $1.6 million expenditure, DPW Director Scott House explained that, while there is “no perfect time” to deal with this given all the moving parts, now makes sense.

Because the pandemic means fewer people currently moving through the area (including to and from Peoples Church), and because so much development in the area is set to come online soon, starting this big project at a later date could mean a lot more trouble.

But not everyone is happy with the situation.

The plan will result in a net loss of surface parking spaces in the Lot #8 area – down from 80 to 38. And that, combined with the loss of other surface parking nearby from other redevelopment, has leaders of Peoples Church unhappy with the plan.

As a recognized religious institution, the church pays no taxes but for decades has enjoyed substantial political power in East Lansing. That power seems to have lessened with more recent City leadership.

In a letter to the City Council dated Nov. 2, Peoples Church’s Rev. Dr. Shawnthea Monroe argued that the church should continue to enjoy the same basic level of free public parking that it has for decades, out of consideration of precedent, prior understandings between the Church and the City, and the good works of the church.

Monroe writes that about 150 nearby public surface parking spaces are being eliminated through various projects. She reaches this figure by suggesting there are 80 spaces eliminated from lot #8, plus 33 to be lost from the MSUFCU office building to be constructed on lot #4, 12 spots to be eliminated from Evergreen Avenue – where it will become a greenway – and 25 spots contractually promised to the Graduate Hotel from Lot #8.

Monroe’s math is not quite right: the change to Lot #8 involves the loss of 42 (not 80) spaces, and the 25 spots promised to the Graduate are double-counted in her math. As for the 12 spaces along Evergreen Avenue used by the church, those are actually not legal parking spots, but the City has long let the Church use them with an agreement not to ticket. If we redo the math to calculate the legal number of surface spots being eliminated in terms of public access, it comes to 100, not 150.

In her Nov. 2 letter, Monroe asks the City for various accommodations, including permanent designation of 25 public parking spaces as “Peoples Church use only,” at no cost.

She writes further, “As Peoples Church has always been given some leeway from Parking Tickets during Sundays and other large use gatherings, we ask that policy to be allowed to continue on adjacent roads in close proximity to Peoples Church, when the situations present.”

Monroe asks additionally for accommodation during construction and for an easement giving Peoples Church a permanent drop-off lane on the north side of the church along the new Albert Avenue.

Dave Ledebuhr, Chair of the church’s development review committee, told ELi yesterday by email, “We had meetings with the City in advance of their awarding the contract to do the improvements to the infrastructure. To date, we have not received any response from our letter.”

He adds, “We have studied options for parking alternatives, but at this point believe it’s the City’s responsibility to provide parking for the businesses, residents, and neighborhoods in this area.”

City staff have bandied around the idea of adding a public parking garage in this area, but doing so involves cost and risk to a City that is experiencing economic stress from underfunded pensions and pandemic-related revenue drops. The City already has a surplus of unused parking in its garages.

So, for now at least, the area will see only the surface-level and below-grade changes as planned by the engineers for this particular project.