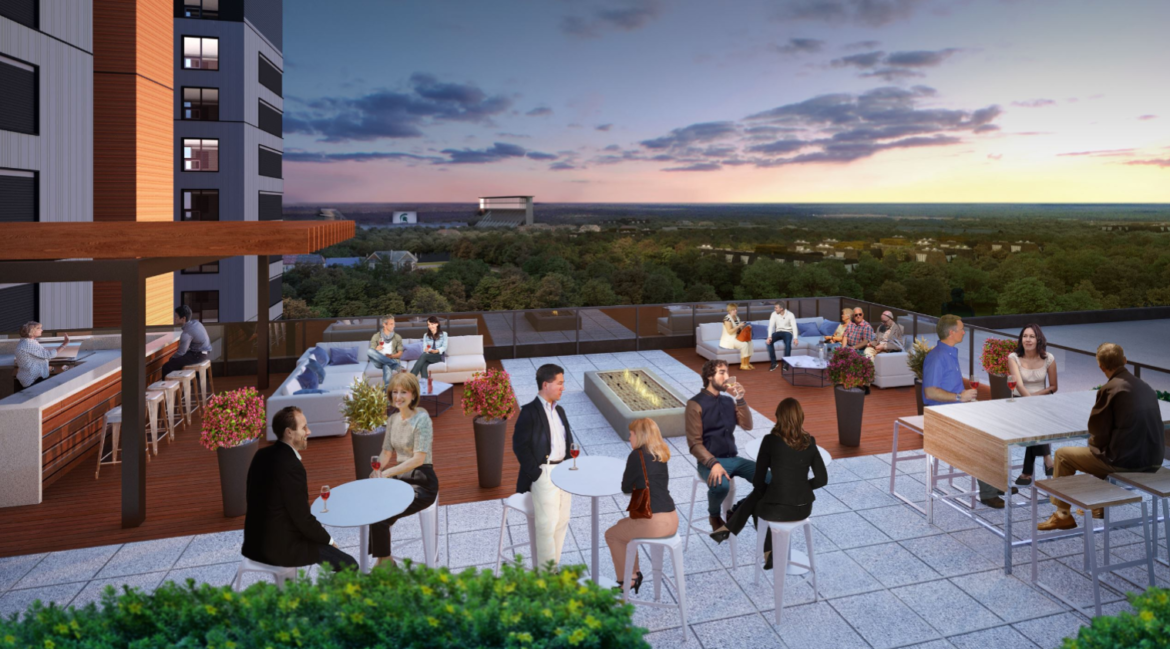 In June 2017, as the project was up for City Council's approval, this was Harbor Bay Real Estate's rendering of the amenity deck for the building that we now know as Newman Lofts.

As the Center City District developers continue to rent Newman Lofts apartments to people under age 55, East Lansing’s City Council directed City staff to delay enforcement of the zoning violations in a 4-1 vote on Tuesday evening.

Council member Lisa Babcock was the lone dissenting vote as she decried what she called “hostage taking” and allowing “the pigeon to drive the bus” — the latter being a reference to a popular children’s book.

Those voting in favor of the delay were afraid of being seen as evicting the young people whose leases are at the center of the violations at Newman Lofts, the 55+ age-restricted apartments constructed on public land as part of the Center City District redevelopment.

The City has indicated the rentals are illegal. But the developers’ lawyers disagree, and in an Oct. 23 letter, requested three things: That the City hold off on requesting eviction of the three units’ tenants, wait to take any action to address the zoning violations, and allow 60 more days to work together to “seek an amicable solution to these issues.”

The developers’ lawyer also wrote in the Oct. 23 letter that “in the interest of furthering productive discussions toward a mutually agreeable solution with City, [the developers] will refrain from leasing additional or extending current leases within Newman Lofts units to tenants who are each under age 55 while discussions are ongoing.”

ELi has previously reported on Harbor Bay’s persistent efforts to change the 55+ age restriction, which began long before the project was completed or Covid-19 struck. Tuesday’s agenda item report from staff says that, “in conversations with Staff, HB BM has further indicated that they are no longer requesting that the overall age restriction on the Newman Lofts be eliminated.”

The decision to give the developers a temporary reprieve is really about giving the three under-55 tenants a reprieve.

On Tuesday, Babcock clearly opposed giving HB BM a break following their repeated letters to City Council trying to eliminate the restriction, including through threat of legal action.

“I know I’m not going to get a Christmas card from the Bell family this year,” Babcock said. “But at what point do they stop coming back, making more demands, more threats . . . and they just start running their business? Rhetorical question.”

But Mayor Aaron Stephens and Mayor Pro Tem Jessy Gregg said it didn’t sit right with them to be part of a move to evict people, especially during a pandemic.

Gregg agreed with Babcock that the developers’ actions have been problematic — Gregg referred to a “hilarious press conference” put on by the developers — but, Gregg said, “I don’t think the tenants should be punished for the owners’ poor decision.”

“Obviously, the issue here is between the developer, and the City and these people have been caught in the mix and it’s not fair to them,” Stephens said.

Babcock didn’t disagree with that sentiment, but countered that the developers were essentially using these three tenants as leverage to sit down at the bargaining table when there was nothing to bargain about.

“I wholly agree,” Babcock said to Stephens, “but this company is really good at taking hostages. Months ago it was what would happen to local partners and ‘Oh my god If we can’t get rid of 55 it will fold up, and it will crush local partners.’ Now it’s three innocent bystanders. My heart goes out to them.” But, she said, she doesn’t trust the developers.

“They put this dispute in writing, so to that extent, you have their agreement to limiting any more rentals during this time,” Homier answered. “Whether or not the dispute continues or whether we can reach an agreement remains to be seen. As to the enforcement mechanism, the City, like most municipalities, tries to achieve compliance before anything else. So you have a large degree of discretion in terms of how you enforce your zoning ordinance in terms of timing.”

Homier added that allowing the underage tenants to continue renting until their leases run out “doesn’t offend me from that perspective.”

Babcock then asked Homier what could happen if HB BM decided to renew those leases.

“That then would, I suppose, trigger some enforcement action,” he said. He explained further, “They know they have an issue, they’ve got to resolve it one way or another, or you’ll be left with some enforcement of that provision.”

With the 4-1 vote in favor of finding a “mutual agreement” with the developers, City staff will now meet with HB BM representatives and try to work out whatever both parties deem to be suitable.

Stephens indicated he’d be interested in an agreement that, in part, will put the 55+ issue to rest for good. Gregg also noted that if there is something mutually beneficial to be worked out, she would be interested in it, saying that an empty apartment building isn’t a good outcome for the City.

Tom Fehrenbach, the Director of Planning, Building & Development, told Council he expects to follow up on the matter with Council in January.

Appreciate knowing what happened at Council?