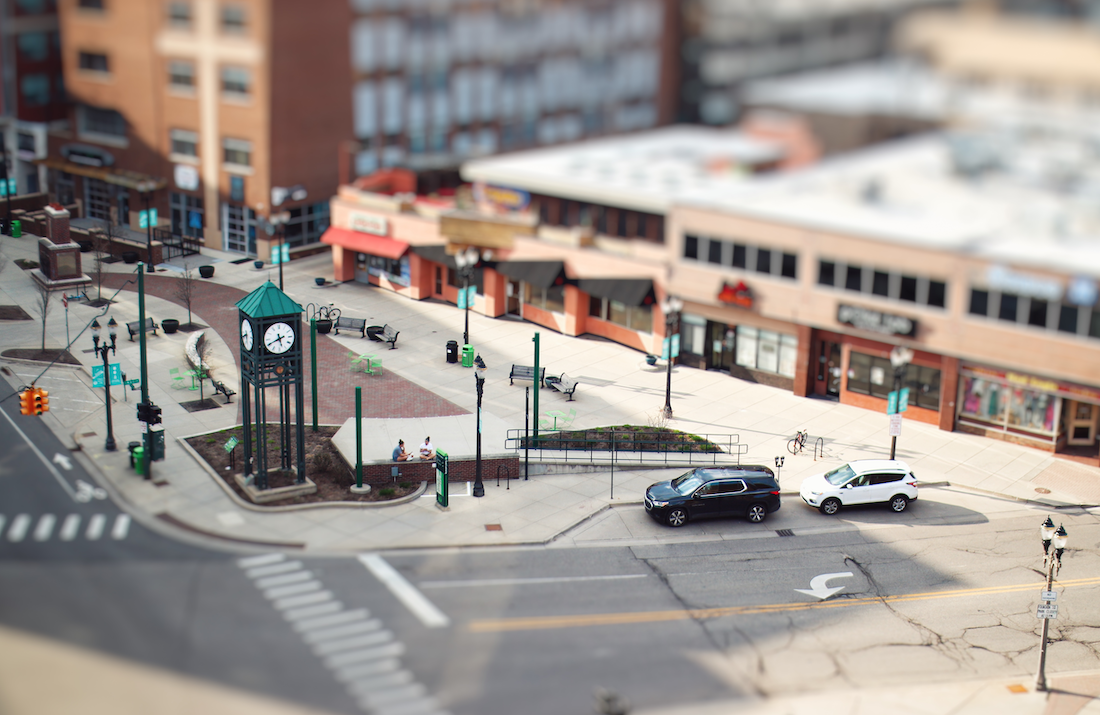 East Lansing's Ann Street Plaza, like much of the rest of downtown, is largely deserted.

Just two months ago ELi reported: “It’s been a long time since we’ve heard this positive a tone at the City of East Lansing’s annual financial forecast presentation.”

But that was then. And this is now.

Today, Mayor Ruth Beier shared with ELi the list of 125 positions in the City for which lay-off letters went out last Wednesday. The lay-offs are called “temporary,” but it’s difficult to know when those jobs might be back.

The list includes seasonal employees like lifeguards, crossing guards, and childcare aides who work in the before-and-after-schools program. With schools closed for the rest of the school year and the Aquatic Center season cancelled, these are not big surprises.

Many of these are part-time positions. The lay-off list does not indicate how much may be saved as a result of these lay-offs.

In the April 8 letter that went out to employees – shared with ELi by a City worker who has been laid off – Human Resources Director Shelli Neumann wrote, “We will recall laid-off employees as business needs warrant based first on job function and then by seniority. You may be eligible for unemployment benefits under these circumstances.”

Last Friday’s e-Dialog newsletter from the City made no mention of this large wave of lay-offs – a wave that speaks to just how bad things are for the City.

Parking revenue has dropped dramatically, as the gates of the garages are now simply left open. (Few people are coming to park because little is open downtown.) Revenue from permits, fines, and fees have also crashed.

And ELi reported earlier today that the longer MSU’s East Lansing campus stays closed, the bigger the impact on the City’s income tax. Faculty and staff who live in other cities will not pay income tax to East Lansing on the income earned during the time they are required to telecommute.

The problem of lost revenue from the income tax is amplified by the losses now suffered by businesses that rely on students being in town and everything being open. Many of those businesses are now either shuttered or barely making it.

In all, 60 such grants were awarded in the Lansing region to a total of 1,875 applicants. But that will have little impact overall.

LEAP President Bob Trezise told ELi last week, “Far and away, the problem is that we had nowhere near enough money to help everyone.”

While working on loan programs, Trezise said his group was “hopeful that some municipalities or organizations can now add on to those not getting our grants for their own designed and funded micro programs in their own municipality. That is dependent upon whether they want to and can financially.”

One glimmer of good news is that the City of East Lansing will receive $289,484 in aid from the federal Coronavirus Aid, Relief, and Economic Security (CARES) Act.

There’s no certainty yet on when City Council will take up budget discussions for next year. Ordinarily such discussions start in March. Beier told ELi last week that those meetings “will start at the end of April or the beginning of May.”

See a run-down of all of ELi’s special COVID-19 reporting.

Alice Dreger reports chiefly on Government and Schools for ELi. She is also ELi's lead investigative reporter. Her national bylines include the New York Times, the Washington Post, the Wall Street Journal, WIRED Magazine, and The Atlantic. Click here to read more about our staff.