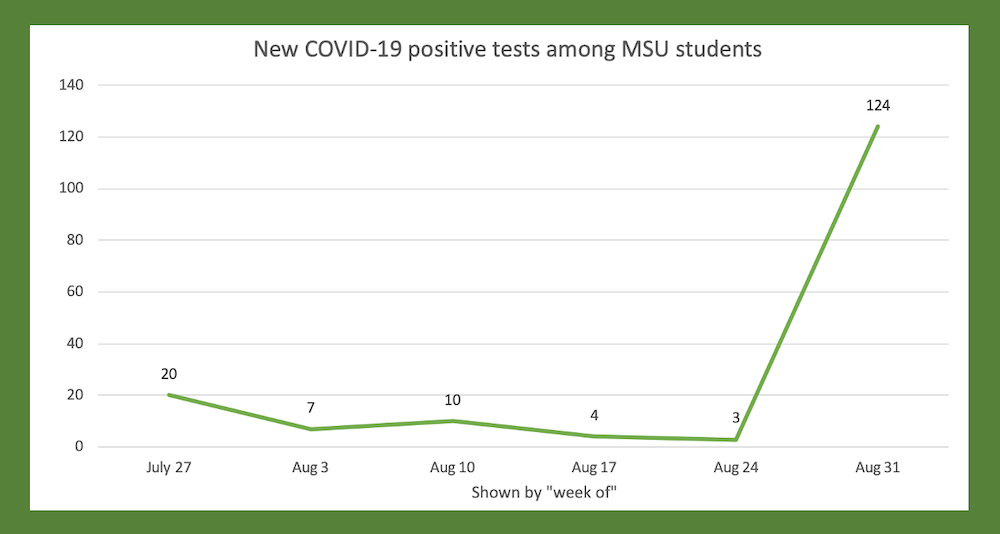 These numbers only reflect cases known to MSU officials.

Michigan State University announced this morning that 126 MSU campus community members – including 124 students and 2 employees – tested positive for COVID-19 between August 31 and September 7. The previous week, MSU reported only three student cases and one employee case.

The data made available so far show just how dramatic the spike is.

According to a press release from MSU Today, “The positive case number only reflects symptomatic students who were tested at MSU testing locations or self-reported an off-campus positive test to the university.”

That means these numbers do not represent the full picture of local infection, many of which may involve people with no symptoms. ELi reported that in the Harper’s outbreak, asymptomatic cases made up 30 percent of primary and 20 percent of secondary cases.

University Physician David Weismantel said today in a communication to the MSU community, “Based on communications with the city of East Lansing and the Ingham County Health Department, we realize there are probably many more positive cases impacting our off-campus students.”

What today’s numbers do definitely tell us is that Covid-19 infection is taking off locally, particularly among MSU students.

And, unlike the Harper’s superspreader event, the recent surge of cases appear to be tied to multiple parties in the area instead of one location.

According to Weismantel, “Through contact tracing efforts, we also know that many of these cases were tied to off-campus social gatherings. There was not one large event, but rather, multiple smaller gatherings of people who were not wearing face coverings or practicing physical distancing.”

This weekend, many parties could be seen at student rental houses in near-university neighborhoods. In most cases, few attendees were wearing masks. Loud music and party games often led to shouting, which is known to increase likelihood of transmission.

The university has now set up a tracking page on Covid-19, but it only provides weekly case counts. By contrast, state and county dashboards include daily demographic information.

MSU has also not disclosed the percentage of cases coming back positive – an important marker for understanding how widespread the virus likely is in the East Lansing-area community. Weismantel and the university spokesperson did not immediately respond to ELi’s request this morning for the positivity rate.

Last Thursday, when ELi contacted Ingham County Health Officer Linda Vail, she seemed unaware of a rise in cases at MSU. She said then that Ingham County’s new cases averaged between 5 and 10 cases a day, and said the percent positive among tests was still around two percent.

Vail said Thursday that she had been hearing of several MSU-related cases, referring to a group of students who went golfing and seemed to contract the virus on the outing.

ELi has not yet been able to reach her today for further comment, but in today’s press release, Vail was quoted as saying, “Over the past week, we have seen the sharpest spike in Ingham County COVID-19 cases to date. The increase is directly tied to various social gatherings, many of which were over capacity.”

“The health department is working in close partnership with the university and the city of East Lansing, but we need the students to join us in our efforts to slow the spread of COVID-19,” she continued.

As of this reporting, the Ingham County dashboard now appears to have been updated with the statistics from MSU, reporting cases through Friday, September 4. Ingham County showed 28 new cases on Thursday and 21 on Friday.

In his letter to the MSU community, Weismantel provided a link to the MSU tracking page, where it is stated that all MSU students who have tested positive “have been directed to self-isolate and receive appropriate medical care.”

Students and employees are encouraged to mask and maintain physical distance as well as enroll in a COVID-19 Early Detection Program, in which enrollees periodically provide saliva samples, branded as Spartan Spit Kits.

MSU students can also make an appointment for testing at Olin Health Center or visit the testing center at Spartan Stadium without an appointment.

This is a developing story and will be updated as more information becomes available.

Emily Joan Elliott reports for ELi on everything from public health to City Council decisions to East Lansing Public Schools. Her reporting for ELi frequently covers issues of migration and social disparities. Click here to read more about our staff.