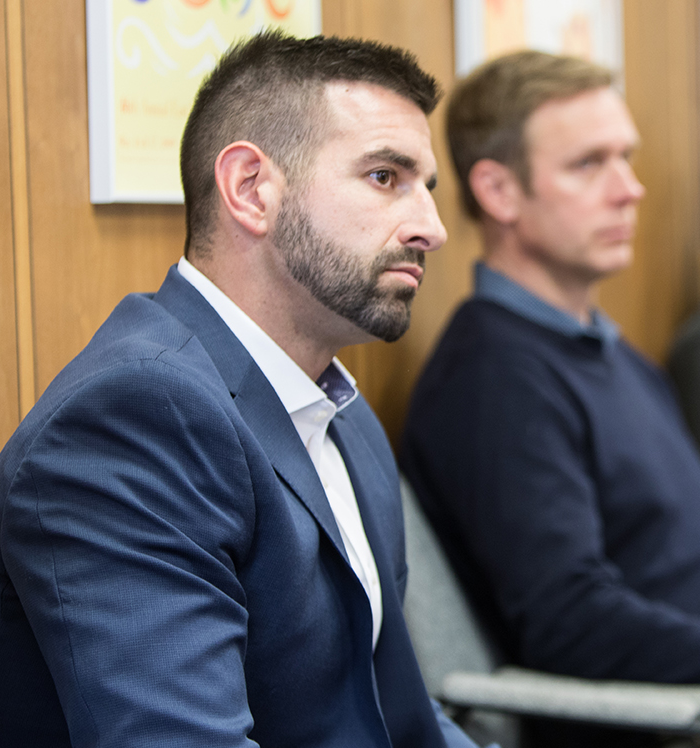 John McGraw of River Caddis Development at the Nov. 14, 2019, meeting of the DDA.

But Mayor Ruth Beier, who is a DDA member, made clear: She’s not interested in being told now that the developers want to build a big new office building only to be told later they want instead to build a high-rise rental apartment tower for students.

With the assistance of City Attorney Tom Yeadon and the support of the rest of the DDA, the proposed Memorandum of Understanding (MOU) between the developer and the DDA was amended to reflect Beier’s concern.

Yeadon correctly articulated Beier’s concern as being about how “developers in the past” have “kind of led with one thing and then switched out a project midway once they got everyone interested.”

Responding to a Request for Proposals sent out last November, River Caddis has indicated they want to construct on the DDA’s land an 8-story, 112-foot-tall glass-wrapped building that would contain about 250,000 square feet of office space. The lobby would likely incorporate some retail or restaurant space. The project would have about 250 interior parking spaces.

Everyone on the DDA is excited about River Caddis’ concept, and at the electronic meeting yesterday, River Caddis’ John McGraw said that’s the kind of feedback his group was looking to get.

But the DDA and City Council are interested in more than the idea; they want to know if the plan is financially viable.

Director of Planning Tom Fehrenbach told the DDA the developers want a 90-day period of exclusivity “to perform due diligence and to work with staff and the DDA to develop an agreement and to begin efforts towards a formal application.”

The DDA authorized its chair, Peter Dewan, to convene a task force of DDA members and stakeholders to work with the developers on a fleshed-out plan, including importantly the public-private partnership aspects. That means the group will explore such questions as how much tax increment financing (TIF) to award the project and for what uses to grant TIF, how the parking will operate, and what the developers will pay for the properties, which carry over $5 million in debt.

In the MOU, the DDA agrees to help the developers by providing all available information about the properties. DDA Vice Chair Jim Croom, who is an attorney, expressed concern about the language requiring the parties to “use their best efforts” in moving a plan forward, noting that was a high legal standard. He recommended (and the DDA agreed) to change that language to “reasonable efforts.”

Croom also raised concerns about language in the document leaving the City open to having to pay the developers’ legal fees if sued, and also questioned the language granting the developers “the exclusive right and option to investigate and consider the development of Project,” suggesting cleaning up the language by dropping “and option.”

Croom’s voluntary work fixing the legal language of this important agreement reflects work he has done for the DDA before on other deals, and he began his remarks by saying he wanted to again bring up the idea of hiring expert legal counsel for the DDA on these big development deals. This is not Croom’s area of legal expertise, nor is it Yeadon’s.

Croom said that he had considered voting “no” on this matter until the DDA has such outside counsel, but thought they could move forward on this for now.

DDA member Greg Ballein said he saw no loss in agreeing to the 90-day exclusivity since there were no other active proposals standing from the Request for Proposals.

But Beier said she was only agreeing to it because it looked like a good project in terms of what would be constructed. She said there wasn’t any point in pursuing a project City leaders aren’t interested in, even if it were the only one on the table.

DDA member Luke Hackney pushed for the idea of issuing a new and less restrictive Request for Proposals.

But City Manager George Lahanas, a member of the DDA, responded that he found the River Caddis idea “exciting” and “exactly what I would love to see in the downtown.” So, he said, he wanted to “see if they can deliver it” by giving them three months to try.

Beier agreed, saying, “If I would design a proposal, as one Council member, it would look a lot like the [River] Caddis proposal.”

In the past, Beier has said she thinks anything over 6 stories and 96 feet is too tall for this location. Asked after the meeting about whether she had changed her mind, she responded, “That depends on many factors that are as yet unknown, so I am not comfortable saying either way right now.”

Asked at the meeting by DDA member Mike Krueger whether the RFP process had been well done, Fehrenbach said it “probably” could have been done better but he felt confident the staff had reached the people they knew to contact.

Croom noted that he had pushed local commercial real estate expert Van Martin to come to the DDA in November to comment on the RFP. Martin told the DDA in no uncertain terms that he felt the RFP was badly constructed and that professional guidance was needed.

At yesterday’s meeting, Croom said he would have preferred to have employed an outside professional to shape the RFP, and would have preferred wider marketing. But he voted in favor of the MOU with River Caddis because “I like this project,” especially given the complex site, which is only a little more than one acre in size, involves a substantial grade change, and carries a large debt.

Croom said he looked forward to hearing more from River Caddis on their “financial wherewithal and partners.” In that, he seemed to be speaking for many.

Alice Dreger reports chiefly on Government and Schools for ELi. She is also ELi's lead investigative reporter. Her national bylines include the New York Times, the Washington Post, the Wall Street Journal, WIRED Magazine, and The Atlantic. Click here to read more about our staff.