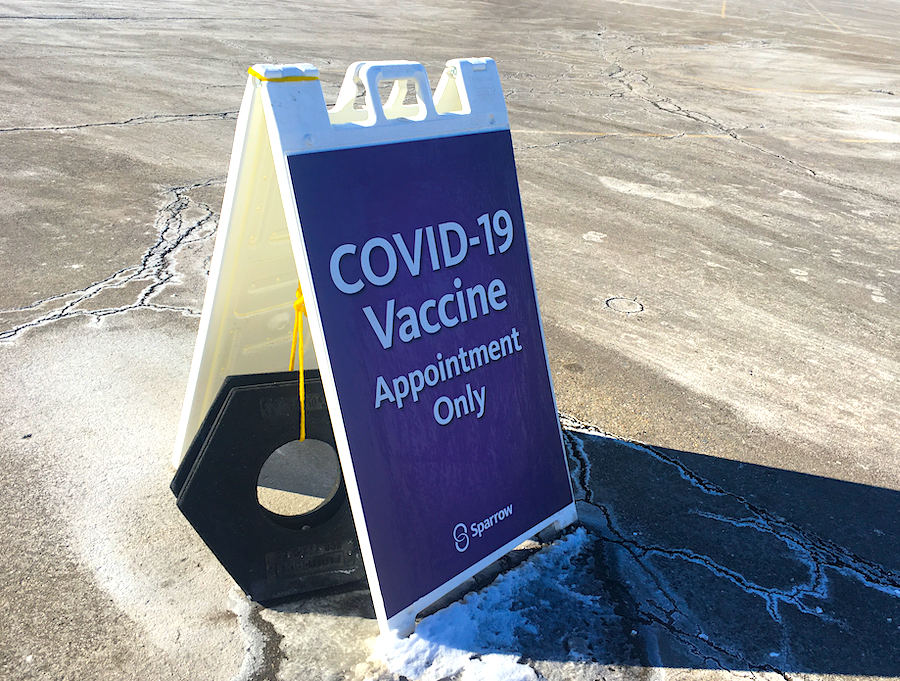 The Sparrow drive-through at the old Sears building provides vaccines for Covid-19.

Ingham County Health Department (ICHD) rolled out registration for the Covid-19 vaccine to the general public during the first week of January, and Sparrow, Meijer, and several other healthcare industry providers allowed for registration later in the month. But several senior citizens have expressed to ELi frustration with the long waits and confusing communication about vaccination appointments.

After registering to express a desire to receive a vaccine through ICHD, several seniors who were over age 70 waited approximately a month before receiving a link to make an appointment. Others say they are still left waiting.

ICHD asks people to fill out this form to express interest in receiving a vaccine. Initially, ICHD said those who submitted the form would receive a confirmation email, but when over 40,000 people registered in one day alone, the Health Department was unable to send these confirmations since its IT system limits sending email addresses to 10,000 emails per day.

ELi reported this, but some seniors have said that the communication issues ran deeper. One couple, both of whom are over age 70, submitted their initial forms on Jan. 8, two days after the system opened.

Another man, who is over age 70 with one underlying condition, contacted ELi in early January after submitting his initial form expressing interest to ICHD on Jan. 6. He never received a confirmation despite several of his friends who were also over 70 receiving links to make appointments.

This individual did not receive a confirmation email until January 27, but then was prompted a week later to make an appointment. Similarly, the couple received links to make appointments in early February, but they cited other factors that led to confusion.

For example, neither of the initial confirmation emails clearly said how they would be contacted regarding an appointment. Wrote the husband to ELi, “Why didn’t they tell us whether they are doing this by phone or by email? Right now I’m checking email over and over again every hour of the day to make sure we don’t miss a notification, and I’m also rushing to answer the phone. Or even worse, are they texting? We gave our land-line number which of course won’t accept texts.”

The Health Department explains the scene behind the confusion.

According to ICHD’s Public Information Officer Amanda Darche, prompts to register will be sent over email. She further elaborated that, “We do not send out more links to schedule than we have capacity for, but a spot will not be held indefinitely. If you are registered, it is important to check your email at least daily and to make your appointment promptly.”

Darche also acknowledged that there is still “a significant backlog of emails and voicemail messages…Currently, we have 19,155 people age 70 and older registered and 9,928 people age 65-69 registered. Due to supply, we are only able to vaccinate roughly 2000-3000 new people (first doses) each week.”

When ICHD announced that it would begin vaccinating individuals between ages 65 to 69, the health department renewed fears that ICHD had lost registrations for those over age 70 who had not yet been able to make an appointment.

But Darche said the reason for expanding access to those 65 and older was twofold. “There is inequity in life expectancy across Ingham County,” wrote Darche to ELi. “People in some areas of our county can expect to live a full decade longer than those residing in other areas of the county. By giving access to only older seniors, we would be prioritizing residents of wealthier, healthier zip codes, which would exacerbate the disparity.”

Others over age 65 are still waiting for appointments through ICHD or other providers.

Explaining the experience of her husband, who is 73 with underlying health conditions, one woman said she is concerned that her husband has yet to even be offered an appointment.

Writing to ELi, she said, “The Ingham County form is a dead end, in our experience, even for those over 70 with underlying conditions. Ditto the Sparrow form, which requires one to have the good luck to check at a magic moment when one can actually get access to it. McLaren reaches out to some patients over 70 who have had surgery there but not to others.”

Another woman, who falls in the 65 to 69 category, told ELi that she had completed forms expressing interest through ICHD, Sparrow, and the Lake Lansing Meijer. So far, she has heard nothing.

Some who received vaccine appointments through ICHD told ELi they had tried to get vaccines by registering elsewhere without success. One man had attempted to make appointments through Sparrow but never succeeded. He had also inquired through MSU Health Team, but was told they are not currently receiving vaccines. When MSU receives them, he was told, vaccines will be distributed through the pharmacy.

“I am waiting to hear more from all of them, with very little info from them,” said the husband, despite the first three reaching out to him saying they would be administering vaccines at some unknown time in the future.

Over the past month, pharmacies have had a slow roll-out and have often used any doses they received in partnership with elder care facilities. Both ICHD and Sparrow have administered vaccines to the wider public that is currently eligible, and both have been successful in the job of not wasting vaccines. Sparrow reports that it has administered 99% of all vaccines received. ICHD has sometimes administered even more vaccines than planned, stating that some Pfizer vials often contain an extra dose.

Part of the problem for both institutions is the uncertain supply of vaccines. Both institutions often find out the number of doses they will receive for the following week on Friday afternoon.

Sparrow Spokesperson John Foren said once the information is available, they begin to set up the registration system. He recommends that individuals check daily and then more frequently come Friday afternoon through the beginning of the upcoming week.

But for those waiting for vaccines, it feels like making “a career of checking the Sparrow portal every hour,” in the words of one ELi reader.

Emily Joan Elliott is ELi's Acting Executive Director and Publisher. She reports for ELi on everything from public health to City Council decisions to East Lansing Public Schools. Her reporting for ELi frequently covers issues of community disparities. Click here to read more about our staff.