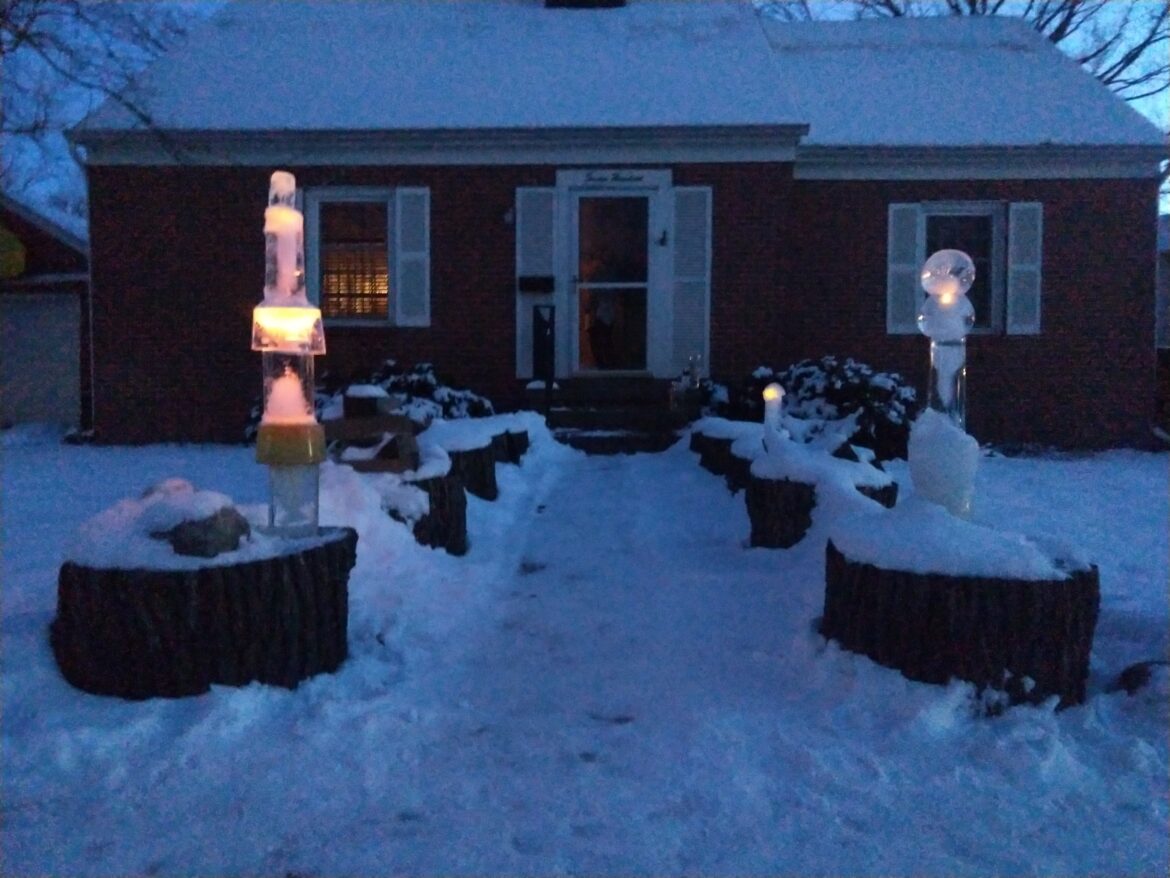 Jon Eguia finds warmth in ice. He wants others in East Lansing to find it, too.

When temperatures plunge, Eguia immerses himself in a new-found winter hobby. Filling buckets and balloons with tap water, he sets them outside, waiting for them to freeze into glistening building blocks for ice sculptures.

For Eguia, creating icy towers makes the most of the elements and helps brighten the dark days of the pandemic. By decorating his lawn and walkway with reflective pieces, he hopes to bring joy to passersby, and to encourage others to make sculptures, too.

“I would rather be having dinner with friends than making ice blocks,” laughs Eguia. “But I can’t right now. I have fun making ice sculptures. This year is the year that invites one to develop hobbies you can do at home.”

Eguia warmed up to the idea of creating icy shapes by imagining what he could do in the winter. Restless from social isolation and staying indoors, he started by making snowmen on the lawn of his home on Collingwood Drive. He was inspired, too, by the luminarias that lined the streets in his Bailey neighborhood over the winter holidays. Awed by the glow of candles inside small paper bags, he realized he could create a similar effect by illuminating orbs and rectangles of ice.

“These sculptures are in the same spirit as the luminarias,” said Eguia. “If these sculptures can make a walk more enjoyable for someone, if they cheer someone up, then that’s a plus. It’s a way to put up a pretty site for our community.”

Eguia never expected he would come to like icy temperatures. Originally from Spain, he lived in California before moving to New York, then East Lansing where he works as an economics professor at Michigan State University. Despite being a Michigander for 14 years, he said he’s struggled to find enjoyable outdoor activities during the winter.

Ice sculpting provided the answer. Eguia had all the tools he needed at home — the balloons, the buckets, and the dishes or containers to create geometric shapes. And he had the motivation. What he lacked, he said, was the talent for arts and crafts, but he knew he could make up the deficit by sticking to humble forms.

“They’re not majestic,” he said. “But they’re beautiful in their simplicity.”

Since the start of the year, Eguia has made several small multi-deck towers, no taller than three- to four-feet. He uses a little bit of slush to bind ice blocks and shapes together. He also molds single blocks and set them close to porch or street lamps to capture light. Once in a while, he fashions donut shapes and inserts a small candle in the center hole, adding a striking element.

“I like mixing light and ice the best,” he said. “It gives that sense of warmth through an orange glow. It’s ironic to see that warmth conveyed through an ice tower. It’s beautiful.”

Eguia is on a quest to learn more about his new winter hobby. He’s explored web pages, read articles, and watched YouTubes. Many people, he said, take ice sculpting to a phenomenal level, using tools and techniques he said that are beyond his capabilities.

“My sculptures are more in the spirit of someone who picks flowers to put in a pot on the windowsill,” he said. “But in the winter, that’s not an easy thing to do.”

Ice sculpting, Eguia said, is a safe and simple way to boost his mood and keeps him engaged. The hobby also vanquishes the dismay of winter weather and the descent into single digits.

“Now I find myself cheering for the cold,” he said. “Rather than dread a cold week, I look forward to building more sculptures and towers. That’s one of the best benefits.”

Eguia hopes his small icy towers set a positive tone and bring smiles to those who see them. He challenges others to try their hand. In time, he hopes ice sculptures line lawns and walkways, similar to the luminarias that evoke joy each December.

“I’m sure there will be people who have more ambitious designs than me,” he said. “I will be very excited to see others pick it up, and to perhaps have a neighborhood full of cheery ice constructions to make winter more fun for everyone.”

Ann Kammerer composes features on local people and local life for ELi's readers. Her personalized portraits of folks around town tell us about good people doing good work. Click here to read more about our staff.