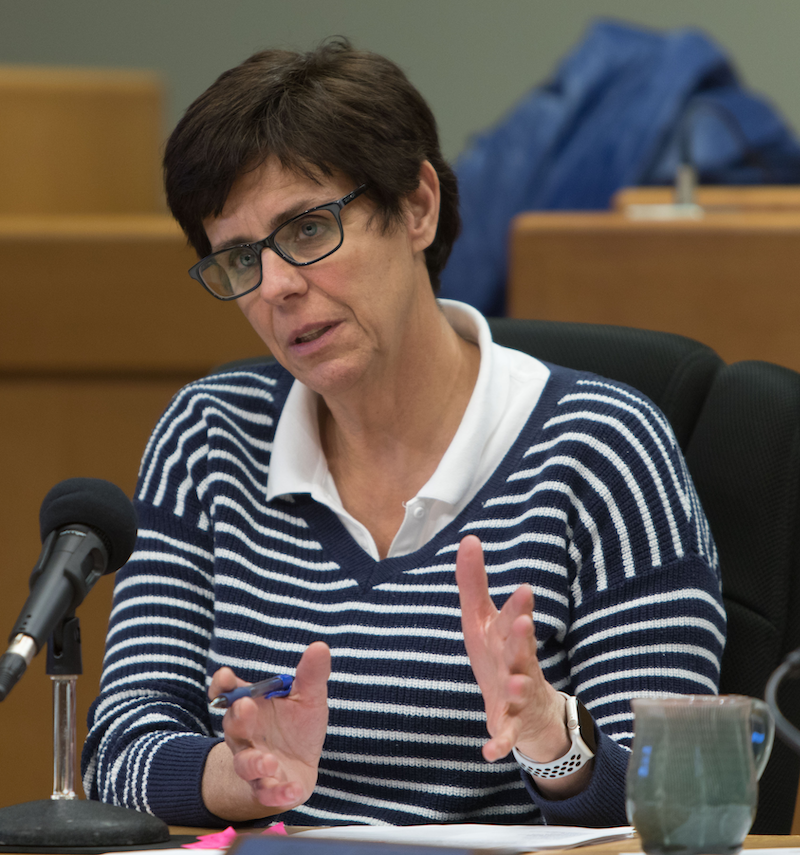 POAM was writing in response to draft resolutions and talks about forming a study committee that would eventually advise Council on establishment of a police oversight commission. While the concept of creating an oversight commission goes back well over a year, two recent cases of use of force by white ELPD officers against black men are now inflaming tensions in the city.

In the letter sent to Beier this week, POAM takes issue with “The misguided notion of granting subpoena power” to the study committee, which they call “extremely illogical, reckless, and likely unlawful.”

The resolution on the study committee, which Council is expected to vote on at its  May 26 meeting, doesn’t actually suggest subpoena power for the group.

But in the May 12 discussion of the resolution, Council member Mark Meadows specifically supported having Mayor Ruth Beier as a voting member of the study group in part because it would allow her, on behalf of the study committee, to use the subpoena power allowed to all Council members under the City Charter.

The POAM letter also objects to the idea of having no members of the “patrol and command units” of ELPD on the study committee, saying “the City Council shows an obvious disdain for our law enforcement officers” with “an intentional lack of balance for the composite membership.” This, they say, undermines the committee’s stated purpose of enhancing police-community relations.

POAM also points to what they see as “direct conflict with our members’ respective collective bargaining agreements” in the plans.

Asked for her response to the letter yesterday, Beier replied that she won’t respond because “I won’t comment to the press about labor issues.”

Beier is a labor economist with the Michigan Education Association, a teachers’ union. The current resolution draft for the study committee calls for Beier to chair the committee and to appoint the other ten members (subject to approval by a majority of Council).

At City Council’s meeting this week, East Lansing citizen Ray Vlasin, who previously served on the City’s Financial Health Review Team, read into the record his suggestions for revising plans for the study committee.

Vlasin called for clearer and narrower objectives focused on designing an oversight commission, engaging independent legal counsel for the group, and not having a Council member as a voting member or chair. (Disclosure: Vlasin is ELi’s voluntary Board Treasurer.)

During the May 12 discussion of the resolution, Council members Jessy Gregg and Aaron Stephens did not support having Beier as a voting member and Chair.

Asked yesterday why she is seeking to be a voting member and chair, Beier responded to ELi, “As Mayor, one of my jobs is to make sure everyone feels safe and welcome in East Lansing. Facilitating a committee that can move us toward that goal is, therefore, my job.”

At this week’s Council meeting, Gregg said she wanted to pursue having “racial equity conversations in our city,” not just about policing but involving the work of all departments and City Council. She suggested considering hiring the group One Love Global to facilitate such discussions, although she said she would be open to inviting proposals from other organizations.

The rest of Council supported this idea. City Manager George Lahanas pointed to the line-item in next year’s budget for diversity training and suggested that it could perhaps be increased from $30,000, possibly up to $50,000. Beier said she thought it important to deal with the Council’s white privilege.

Stephens, who serves as the Mayor Pro Tem (substitute mayor) as well as Council liaison to the Human Relations Commission, said he had watched police videos released last week of the arrest of Anthony Loggins Jr. and wants follow-up on what he saw.

Videos of the arrest of Loggins in December 2019 included actions by ELPD Officer Andrew Stephenson that apparently alarmed City officials enough in March to send that case and materials from another arrest six weeks later to the Michigan State Police for possible criminal charges against Stephenson for possible “excessive use of force.”

Michigan State Police Lieutenant Erik Darling subsequently exonerated Stephenson in both cases. But in the wake of the videos’ release, a citizen petition is calling for Stephenson to be fired.

At Council this week, Mayor Pro Tem Stephens said he found frightening how “such a minimal traffic violation turned into what it did” in the Loggins case.

Loggins was originally stopped for failing to use his turn signal before coming out of a parking lot and was then found by officers to be driving with a suspended license and in an uninsured car. The arrest escalated into officers taking him to the ground, injuring his face and eye, with Loggins taken to the hospital.

Stephens noted he had previously brought up at Council the problems with aggressive policing around a DWLS (driving with a license suspended) charge. He said this week he wants action now, to move in the direction of officers writing tickets when there is no safety problem, rather than having arrests that can lead to injuries, more severe charges of resisting arrest, and ballooning fines.

At this week’s meeting, Council also discussed a proposal from citizen Nell Kuhnmuench for legislative changes aimed at making sure that arrest records are destroyed or kept confidential in cases where charges are dropped or a person is acquitted of charges.

City Attorney Tom Yeadon said that ELPD records are sealed if there is an acquittal or if charges are dismissed, but that court systems leave records available online.

The Council through the City Manager instructed the City’s lobbyist to seek changes in this regard at the state level.

Next Tuesday, Council will hold a formal public hearing on the resolution to create the study committee on police oversight. Comment can be sent to Council via email to council@cityofeastlansing.com and/or provided live by calling into the meeting.

Correction, 9:20 a.m.: When originally published, this article failed to note that the mayor’s ten appointments to the study committee would be subject to an approval of a majority of Council (assuming the resolution as now drafted is adopted). That is now noted.

ELi has a special section dedicated to our current reporting on East Lansing Policing. See it here.

Find an overview of our reporting on police oversight here.

To stay informed, sign up for ELi’s updates by clicking here.