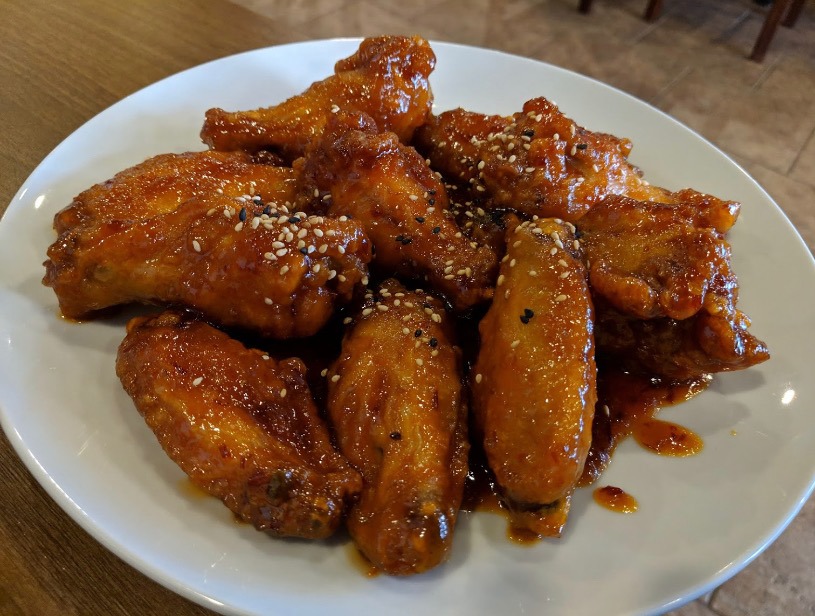 A plate of chicken wings from Baps.

In the olden days when I actually went to my office on the fifth floor of the Marriott in downtown East Lansing, the Korean restaurant Baps was visible out my window. I ate there fairly often because the food was good and because it made me feel like I was in a little barbecue place in Seoul. Big-screen TVs showed K-pop. The staff was young and cheerful. And most of the other customers were actually Korean.

When time was not an issue, I met someone for barbecue at a table with a built-in grill and lingered for ages, grilling meat and vegetables and experimenting with the mysterious condiments. For a more lunch hour kind of lunch, I could count on a quick hit of Dolsot Bibimbap, a saucy assortment of vegetables and meat over rice served in a hot stone bowl that crisped the bottom layer of rice.

I had never ordered takeout from Baps because it was so accessible during the work week, but I recently got to thinking about how great a bowl of hot, spicy soup would be and how much I’d like someone else to make that soup. I told Captain Carnivore it was going to be Baps for dinner and the rule was that we would not order anything we “usually” ordered at a Korean restaurant – no Bulgogi, no dumplings, no Chapchae. Barbecue and hotpot were out because it was takeout.

We are trying very hard not to use third-party delivery companies when we order takeout. The point is to support local restaurants during the pandemic, and those services take a significant cut of every order. We ordered online on the Baps website, and the Captain drove downtown for curbside pickup.  There was a little confusion because – unlike most restaurants – Baps did not take our card number and run it through at the time we placed our order. They are not currently able to take credit cards online, and do not take payment until you show up to collect your food. Bear this in mind if you order.

I started with an order of seaweed rice rolls, which is basically Korean sushi with interesting fillings like bulgogi, fishcake, and pickled radish. It was light and flavorful. One order was enough to have two or three pieces as an appetizer with enough for lunch the next day. The Captain started with the deep-fried squid, which tasted good but did the least well in maintaining an appealing texture on the road.  We will definitely try again when we can go in and eat them right out of the fryer.

Any discussion of the rest of our order requires a brief outline of our marriage-long quest for the spiciest food on earth. In over two decades of ordering food with my husband, Captain Carnivore, the search for a restaurant that will actually give him (really) spicy food has become something of a grail quest. “I want it as hot as you make it for yourself” he once said at a Thai place in the Detroit suburbs. “No, mister” said the waiter with an eye roll, “you don’t want that.”

But mister actually does. By phone and online we have begged for “as spicy as you can get it,” and “extra spicy, please” to no avail. But after all these years, Baps finally granted his wish to have a meal so hot that his ears smoked. We had asked for the Captain’s super spicy chicken wings to be “Extra Spicy.” When I asked him if they were good, he had to wipe his eyes and blow his nose before answering that they were good. They were not your run-of-the-mill wings, they had a really interesting flavor, but (here he stopped to blow his nose again) they were really, really hot.

Thinking he deserved whatever he got, I took my first spoonful of Spicy Beef Brisket Stew, and realized that the kitchen had assumed the chicken wing eater was not alone in wanting to have his head blown off. I just wanted a little tingle, but my container of broth, vegetables, and shredded brisket was spicy enough that I required tissues, a glass of milk, frequent breaks, and a moment of prayer. It was also very tasty. The moral: at this particular restaurant, when they label a dish “spicy” on the menu, it’s going to be spicy enough. Don’t be a hero.

Being a barbecue restaurant, Baps has a fairly meat-centric menu, but vegetarians need not despair.  The bibimbap with tofu is delicious as is the vegetable and rice cake soup (although I can’t say that the broth is vegetarian, so ask before you order). It’s also pretty kid friendly, particularly the pork and chicken katsu which are kind of like McNuggets that died and went to heaven. Many kids would also happily pick at an order of bibimbap, eating out the rice and pieces of beef or chicken.

Help ELi keep you in the know about all the great locales our city has to offer!

Ann Nichols does legal and culture reporting for ELi, and is the author of our placemaking column, Ann About Town. She also serves on ELi’s Board of Directors and as our Public Editor. Click here to read more about our staff.