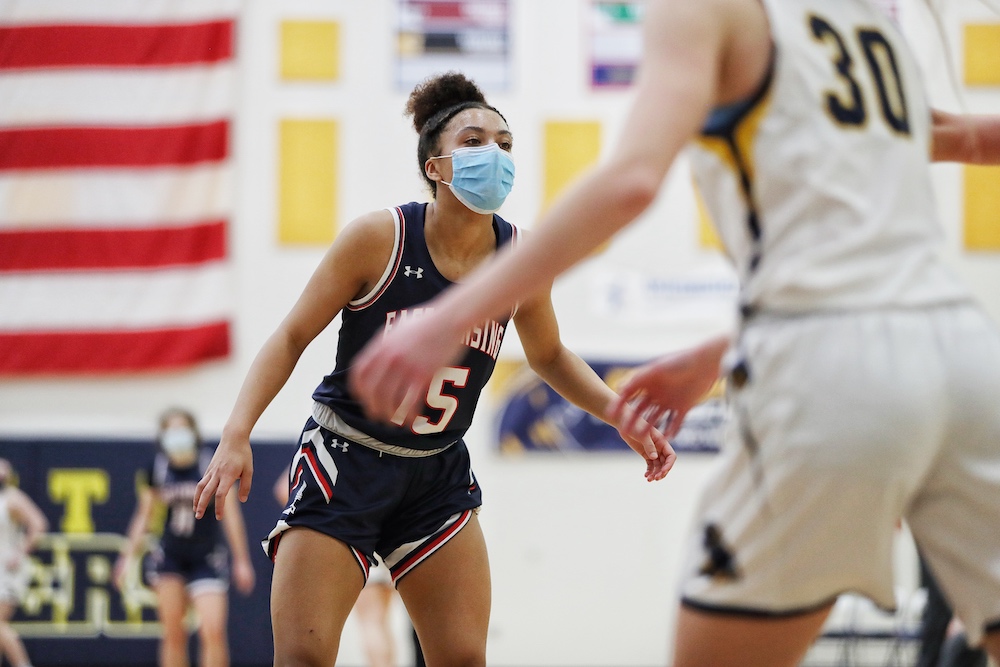 Corinne "Corkie" Jones didn't lead East Lansing in scoring on Wednesday (Mar. 24, 2021), but she was perhaps the integral player in the Trojans dominant defensive performance.

In a basketball game where the score resembled that of a football game for most of the night — final score: 50-28 — the best unit on the court was East Lansing’s defense.

So, naturally, it was the best defensive player for the Trojans, Corinne “Corkie” Jones, who stood out in a game where offense was largely absent. As the game devolved into a rock fight, with DeWitt missing a myriad of 3s and the Trojans failing to find a rhythm, Jones impacted the game repeatedly on the defensive end.

On a night where East Lansing’s offense started dormant and never quite clicked, the Trojans still smothered the Panthers because of a suffocating defense that held DeWitt to six field goals all game. It didn’t matter that the Trojans scored six points in the first quarter and had tallied only 18 at halftime, because DeWitt had scored two and eight points at each of those respective markers.

Now, East Lansing is moving on to the district finals against Haslett on Friday evening not due to an offensive outburst, but because of Jones and her defense.

“Corkie is such a smart kid and she’s so athletic and she anticipates so well,” Smith said. “She’s our best defender.”

After more than half of the first quarter had elapsed, DeWitt still hadn’t cracked the scoreboard. The Trojans led, 4-0, and were defending the Panthers into taking lower-percentage perimeter shots. DeWitt’s guards couldn’t warp the EL defense, neither by passing the ball inside nor driving it off ball screens. Instead, the ball moved around the perimeter until a shooter got enough space to just launch a shot — and few went in for the Panthers.

And with the score sitting at 12-6 in favor of the Trojans 1:42 before halftime, Jones bodied up her defensive mark near midcourt and jarred the ball loose without touching it. It rolled over midcourt, forcing an over-and-back violation giving East Lansing possession.

Half a minute later, DeWitt had to inbounds from in front of the Trojan bench. As the pass intended for a Panthers guard flew into play, Jones jumped into its flight path and snatched it mid-air with her right hand. Before the fastbreak could be turned into points, DeWitt committed a foul. Later in that possession, Ella Miller buried a straightaway 3 for the Trojans.

And after carrying an 18-8 lead into halftime, the Trojans continued turning the screws on DeWitt in the third quarter. In the first 4:11 of the third quarter, junior Payton Baker led an offensive spurt, scoring six points and assisting on a Jones bucket. Baker added 12 total points off the bench, while junior center Ella Miller led the Trojans with 16.

“She’s been a huge shot in the arm for this team,” Smith said of Baker, noting she’s the most improved player he’s coached in his two decades at ELHS.

With the score sitting at 26-14 in favor of East Lansing with 2:50 left in the third, the Panthers looked like they might be keeping pace, or at least holding the Trojans down well enough to stay close.

But the Trojans again clamped down, scoring the final five points of the frame and outpacing the Panthers, 13-6, in the third quarter.

And again, it was Jones providing the defensive spark.

With 1:42 left in the third quarter, a DeWitt guard drove into the paint, causing senior Annelise Lebeda to slide over and provide defensive cover. That left her previous defensive assignment wide open for a backdoor cut. The driving DeWitt guard saw as much and flung a baseline pass, presuming a layup to follow. Instead, Jones made a split-second rotation from the free throw line, meeting the ball and intercepting it under her own hoop. On the ensuing offensive possession, EL scored.

The Trojans led 31-14 with one quarter remaining, and the margin never got smaller than 14 points in the fourth quarter.

On a day where the offense put forth an unremarkable effort, the Trojan defense, led by Jones, dominated.

“In this day and age, they ask if you won, and then the second question is, ‘How many points did you score?’ They don’t say, you know, ‘Did you shut the other team’s best player down?’ That’s what Corkie does,” Smith said. “So, she doesn’t get all the glory points, but she sure does make this team go defensively. And in a game where your offense does sort of leave you for a bit, like you said, that’s indispensable.”

See more of Gary Caldwell’s great photography from this game for ELi at this link. You can download and share these photos for free as part of our public service journalism! Just be sure to credit “Gary Caldwell for ELi.”

ELi’s reporting continues to be made possible by our generous sponsors. You are invited to join them today! Thank you!