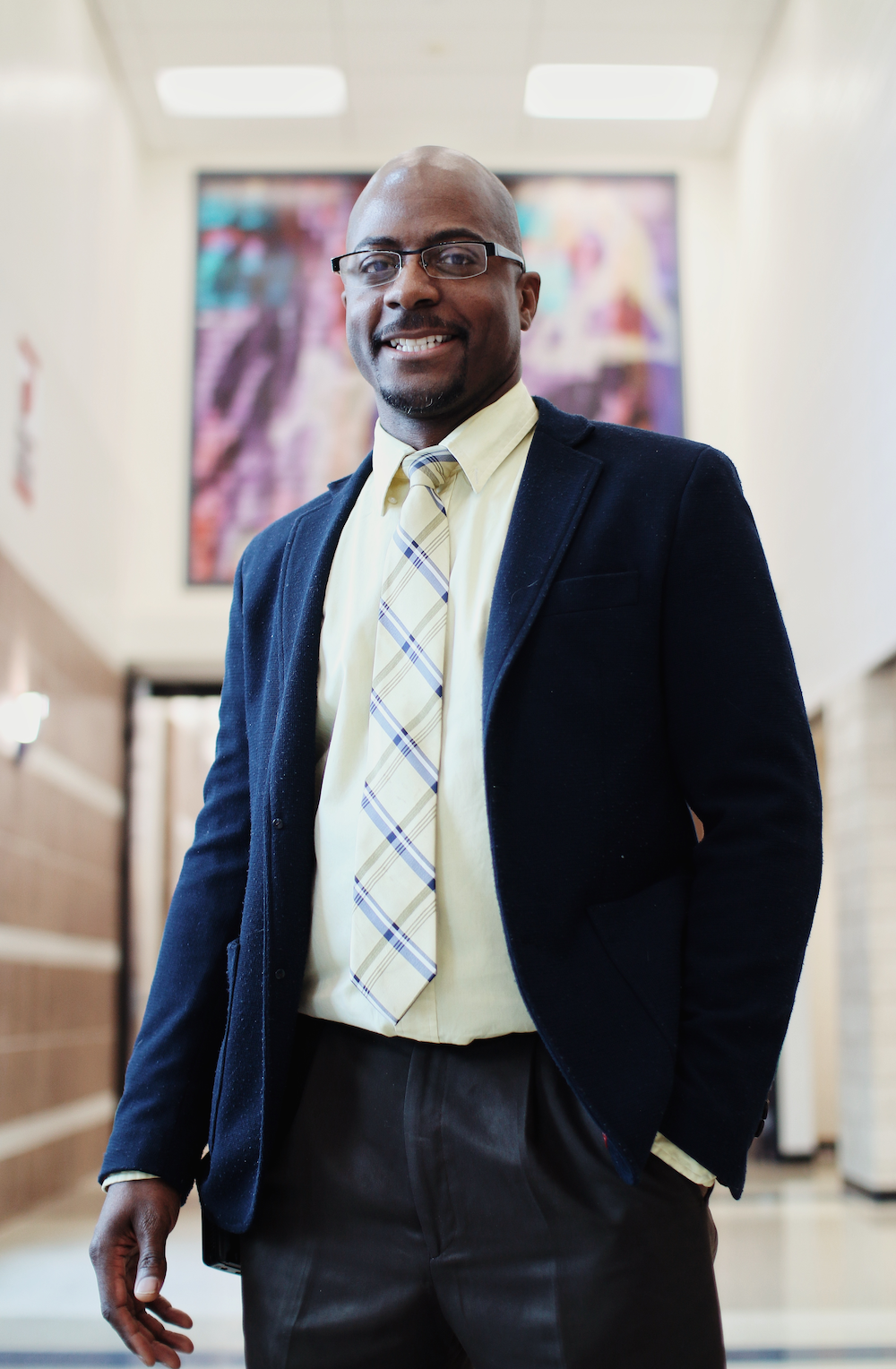 Jerry Jones was originally hired as a security guard at ELHS. He developed such good relations, he was later hired into a new position: Student Advocate.

The Policy Committee of the East Lansing School Board met yesterday afternoon and devoted the majority of its attention to how East Lansing Public Schools may limit police presence in schools and promote racial equity. These goals had been revealed at last Monday’s full board meeting.

School security – how best to manage it?

The Policy Committee – made up of ELPS Trustees Terah Chambers, Kath Edsall, and Chris Martin, and joined by Superintendent Dori Leyko – indicated yesterday that last Monday’s statement had received mostly positive feedback, but that some parents had voiced concern over the district’s decision to discontinue the use of an ELPD “resource officer.”

During a discussion on what school security might look like, Leyko explained that most of the day-to-day security operations actually already fall to hired security guards in the schools, while ELPD resource officers tended to drop in and out of the buildings.

ELPS currently employs two security guards, but its proposed budget for fiscal year 2021 includes just one. The budget, however, had also anticipated cost-sharing for the ELPD resource officer, so that expense is likely to be eliminated.

Leyko saw benefits to the security guards. According to her observations, the hired security guards, who are unarmed, have favorable relationships with the students. Jerry Jones, the high school’s relative new Student Advocate, began working in ELPS as a security guard and developed positive relations with students. (See our report on that from Alex Hosey.)

Stopping the use of a resource officer led to additional conversations on school security policy. Current district policies 4110 and 8130 govern security and make allowances for coordinating with the police. Under a revised strategy, the police would certainly be called in an emergency, but a revised policy would limit police involvement and presence in East Lansing schools.

The conversation involved questions about searching lockers, backpacks, and cars—to what extent should searches occur and at what point should the police be involved.

Edsall said she believed that in any other situation, police would need to procure a warrant for searches. She also noted that while a student can generally control the contents of a backpack or locker, cars are often shared with siblings or parents who might leave contraband behind.

Martin, an attorney, explained that according to case law, students automatically consent to searches while on school grounds.

“But, profiling and abusive actions are concerns,” Martin said. “How can we protect the students?

Leyko explained that searches conducted under reasonable suspicions may result in ELPS working with ELPD. If a weapon were to be found, for example, the police would be called.

Before making substantial changes, the committee plans to consult with school administrators and the district’s attorney.

Addressing racial equity as a district

The Committee plans to begin by identifying broad categories of interest, which will most likely include academic achievement, rules and regulations, and representation among employees.

The Committee will begin reviewing racial equity policies from districts that have them, but an ELPS policy will be specifically tailored to the district.

“There is no off-the-shelf policy we can use,” said the committee Chair, Terah Chambers. “The best policy comes from community needs but with support of people at the top. It needs to be a partnership.”

Leyko advocated for making the policy the same across the district but allowing for some flexibility during implementation at different grade levels. Balancing the knowledge of experts with the needs of administrators will be key, in her assessment.

Equity teams, which will be established at each building, may play a role in providing feedback, but the School Board will also need to provide the teams with directions for action, Leyko said.

Revisiting issues from past meetings, the committee agreed to rewrite policy 8890, “Pregnant Students,” by replacing the pronouns “she/hers” with “they/their” and using broad language for how pregnant students can continue their educations. The broadened language will allow for online education and other types of educational programs that may become available.

The committee also revisited a discussion on what forms of punishment are acceptable for behavioral problems. At the last meeting, the committee agreed that ELPS policy should affirm the importance of recess and dissuade teachers from taking away recess as a consequence to unfavorable behavior.

When reviewing Policy 8300, “Student Discipline,” the committee questioned whether behavior outside school should be punished in school. The general consensus was that such action was only warranted to make accommodations following an assault, permitting the assaulted party to keep distance from the assaulter.

The committee plans to ask Thrun, the law firm it retains, to review the policy to make sure a new one would not conflict with Michigan law.

Chambers told the members to expect a busy summer as they consider major policy revisions.

Emily Joan Elliott reports for ELi on everything from public health to City Council decisions to East Lansing Public Schools. Her reporting for ELi frequently covers issues of migration and social disparities. Click here to read more about our staff.