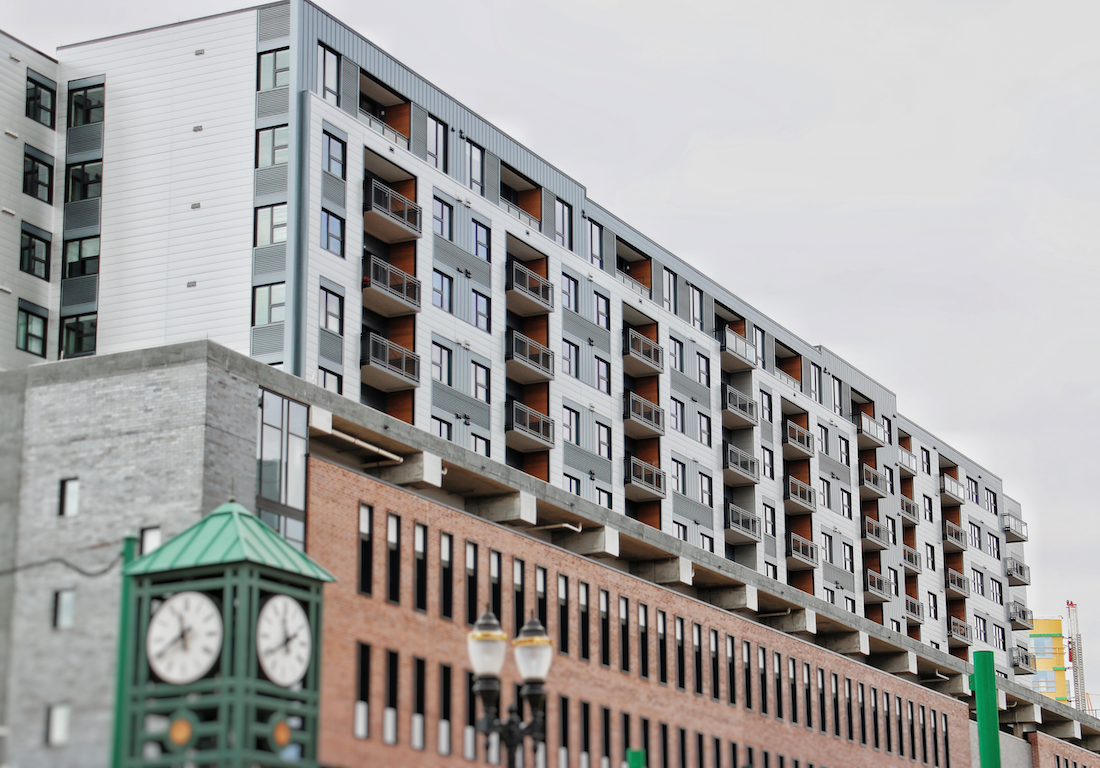 Newman Lofts was constructed on public land, but is privately owned. The parking garage is owned by the City.

The developers who built the Center City District project in downtown East Lansing now want permission from the City of East Lansing to convert the Newman Lofts senior-housing apartments to open market-rate rentals, a move that would allow anyone, including students, to live there.

Many predicted that this would happen, speculating that there would not be enough people over 55 who would choose to rent at this location. But few expected the request to come this soon.

Newman Lofts has been open only about six months. The privately-owned apartment buildings were constructed on public land, and the change of use would require permission of City Council.

Although residents of and visitors to Newman Lofts consistently describe the housing there as attractive and nicely designed – including in terms of the balconies, views, rooftop green space, and social gathering and exercise spaces –  the developers have struggled to rent the 92 apartments.

Tenants include top administrators from Michigan State University, past and present. But only 21 of the apartments are said to have been rented.

One criticism has been the price. The smallest unit at 744 square feet starts at $1,445 per month. The largest unit costs almost $3,000 a month. There are few apartments in East Lansing that cost this much to rent.

Another criticism has been the lack of universal design in the housing, something seniors with money expect, especially in new construction.

Some tenants have also named noise from the nearby bars as a problem. This is an issue that might have been avoided if the developers had built the senior housing on the Grand River Ave. side of the project, facing the open space of MSU’s campus.

But that was not how the developers elected to approach the site, instead constructing student-attracting apartments along their property on Grand River Ave.

Last month, Newman Lofts resident Mary Fielding wrote to City Council to complain about the noise, saying she found the “level of support from the Police Department [on noise complaints] disappointing.”

Another resident, Judith Labovitz, also wrote to Council to complain about “the excessive noise from the outdoor bars” and also the lack of any space for drivers to drop residents off, pick them up, or make deliveries. The project was designed with no space for this, and in fact replaced a taxi lane on Albert Avenue.

Newman Lofts was built above the new parking garage and retail space that were also constructed as part of the Center City District deal, a complex public-private partnership. The Center City District project includes as well the one larger building already aimed at student renters – The Landmark on Grand River Avenue (with Target on the ground floor).

Newman Lofts is built on public land that used to be home to the city’s most lucrative parking lot, Lot #1. The developers are paying the City rent for use of the airspace, while a $58 million tax increment financing (TIF) deal diverts all eligible taxes for 30 years to pay for project-related costs, including the parking garage.

The Center City District project has been controversial from the start, not least because it promised what was probably the City’s most valuable single property to a specific developer without a Request for Proposals going out to all interested developers. There was not even an appraisal done to find out the worth of the property before the deal was struck.

In November, one local commercial real estate expert came to the Downtown Development Authority’s meeting to sharply criticize how the matter was handled.

The Center City District developers, Harbor Bay and Ballein Management, agreed to build this housing restricted to people age 55+ in a complex development agreement with the City.

The City’s law (Ordinance 1384) also currently requires that big downtown housing projects like this one dedicate at least 25 percent of their units to something other than market-rate (student-attracting) housing.

The developers decided to satisfy the legal requirement by building senior housing instead of the other options allowed under Ordinance 1384 – either owner-occupied condo apartments or rental apartments for people with lower incomes.

The Center City District project is the only one ever to see the construction of “diversified housing” required under East Lansing’s Ordinance 1384. In the Park District deal, struck between the City and developers DRW Convexity, the developers are set to build an apartment building including income-restricted housing at 341 Evergreen Avenue.

It was that commitment to lower-income housing that got DRW Convexity permission to build The Abbot at the corner of Grand River Avenue and Abbot Road.