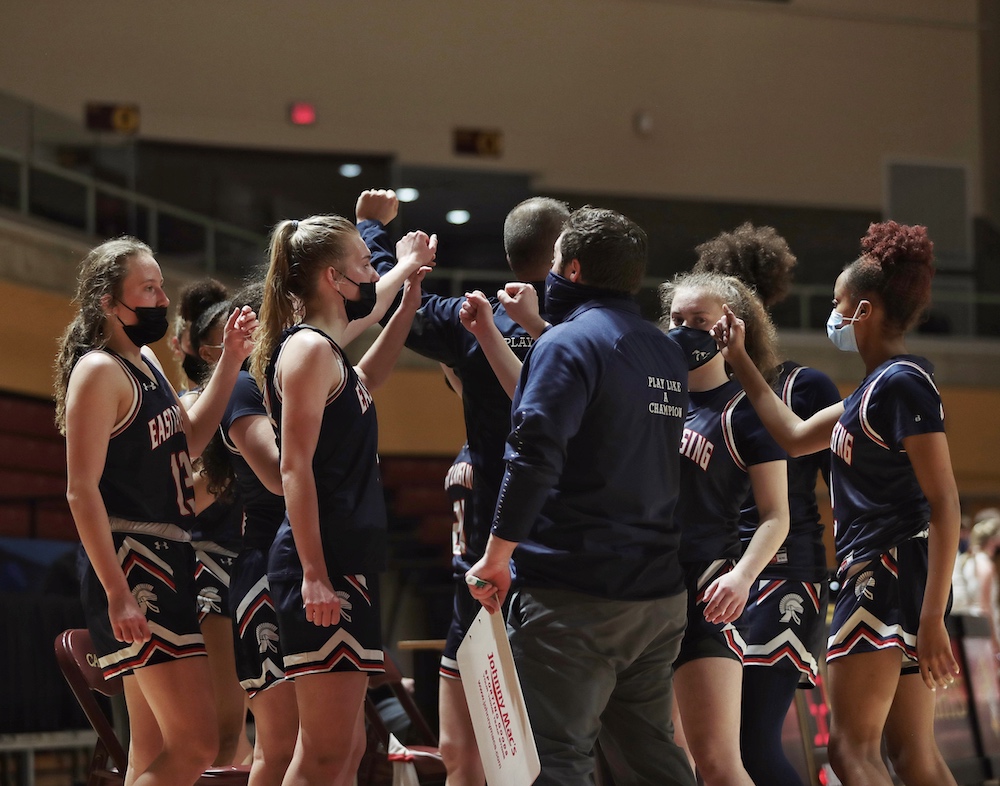 In the moments after it all ended — when the East Lansing girls basketball team’s previously undefeated season was now blemished and a dream season was cut short in the state quarterfinals — it was easy to lose sight of the bigger picture.

Over the last four years, the Trojans’ senior class has won four conference titles, four district titles, two regional titles (and was slated to play for a third in 2020), and made a state championship game. In the past two seasons alone, EL has gone 39-2. And this season, a year after Covid-19 cut the state tournament short prior to the regional finals, the Trojans romped into the state quarterfinals following an emphatic regional championship.

A remarkable body of work, but harder to appreciate when the pursuit of a crowning achievement has just been cut short.

East Lansing’s season ended on Monday night in a 56-42 loss to Hudsonville, in a state quarterfinal played at Calvin College. Despite dominating the first quarter and leading at the half, the Trojans ultimately couldn’t keep pace with the Eagles 3-point shooting. Facing a double-digit deficit with the season on the line, East Lansing fought valiantly to close the gap — but was too little, too late.

The Trojans parlayed the hot defensive start into a solid lead. Junior point guard Soraya Timms slashed to the rim early, scoring. Jones got fouled and made two free throws, as did Baker. Possession by possession, the Trojans built a gap.

With about 10 seconds remaining in the first quarter, senior guard Annelise Lebeda curled from the left corner into the paint, floating a righty runner up and in as the clock ticked past five seconds left. EL led, 13-4, after one frame.

Despite a similar level of effort defensively, the Trojans couldn’t maintain the lead in the second quarter. It was inevitable that the Eagles would eventually start to score more, and 18 seconds into the second quarter, sophomore Jaci Tubergen buried a 3 for the Eagles. A steal and a transition bucket followed and suddenly a 13-4 game was 13-9.

As the Eagles offense heated up, East Lansing’s was absent. By the final minute of the first half, EL only led by only, 17-13. Then, with 49 seconds left in the half, sophomore Maddie Petroelje canned a 3 from the right wing.

The Trojans clung to a 17-16 lead as the halftime buzzer sounded. It would quickly evaporate in the second half, courtesy of a 3-point display from Tubergen and Petroelje.

“I thought they picked up their intensity a lot,” Smith said of Hudsonville in the second half.

In the first 1:32 of the third quarter, Tubergen hit back-to-back 3s — including a heat check six feet behind the arc — and made two free throws. On her own, Tubergen had shot the Eagles to a 24-17 lead.

When Petroelje answered two EL free throws with another Hudsonville 3, Smith called timeout. With 5:30 left in the third, the Trojans trailed. 27-19.

“We need some offense!” Smith yelled to his huddled players over cheers and arena music.

About three minutes later, Smith took another timeout. EL trailed, 34-23, with 2:26 left in the third. Smith took time after Tubergen slipped a screen to get away from Timms for an open corner 3.

“What’re you made out of?” Smith asked his huddled players. EL closed the quarter on a 6-0 run to trail, 34-29, with eight minutes left to play.

But as the Trojans attempted to mount a comeback, they started encountering obstacles. For one, EL couldn’t get a 3 to fall against the Eagles on Monday; Hudsonville outshot East Lansing 9-0 from 3.

The other obstacle, Smith said after the game, was the officiating. Smith felt calls for similar incidents weren’t consistently called throughout the game or on either team. And the level of physical play the refs allowed played to Hudsonville’s advantage, Smith said.

“And they played really physically, as I mentioned,” Smith said. “And it was really hard for our girls to figure out. Because on one end it was super physical, with the fouls being called on us in the second half. And on the other end, it was still physical and we couldn’t get — we couldn’t buy a call going to the basket.”

And despite their 3-point shooting nadir, and a dearth of free throw opportunities, the Trojans almost pulled off the comeback. With 4:30 left in the game, the Eagles’ lead was only four points, 42-38.

With 4:24 remaining, Hudsonville set up to inbound the ball from the sideline, right in front of their bench. Petroelje was alone in the near corner, something the EL coaches noticed and hollered at their defenders to correct. As a Trojan defender moved to Petroelje — now traversing the baseline to the opposite corner — it left the corner open for Tubergen.

Tubergen filled the space left by Petroelje and fired a dagger catch-and-shoot 3 directly in front of her bench.

“The girls had to overcome more than they could tonight,” Smith said.

When the buzzer sounded and a feeling of finality fell over the affair, the East Lansing players quickly vacated the arena for the locker room. Smith stayed and briefly talked with reporters, sharing his frustrations.

In that moment, when it’s all over, there’s an inclination to want to forget about it.

But it’s important to remember how you got there in the first place.

See all of Gary Caldwell’s photos from the game.