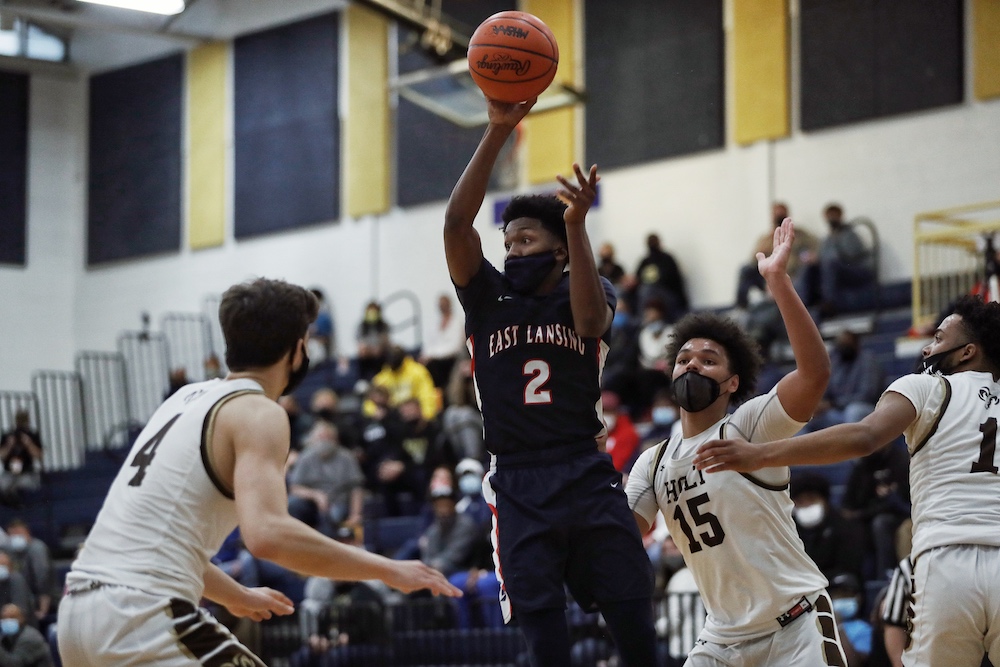 ELHS Trojan Marcus Wourman gets into the heart of the defense against Holt on Tuesday night (Mar. 30, 2021).

Some of the burdens East Lansing senior guard Marcus Wourman bears are obvious.

Like fulfilling his role as the oldest player, and de facto leader, of the team. Or being the go-to shot creator and scorer when the Trojans need a bucket.

Other burdens, though, are not as obvious. Four strips of KT Tape running up, down, and across Wourman’s lower back, underneath his jersey, are the only visible evidence of a back injury sustained in a hard fall last Tuesday.

And, speaking to reporters after Tuesday’s regional win, Wourman shared that he is honoring his late grandmother, who unexpectedly died in May.

“I always try to honor her. I actually got a chain that I always wear before game time. That’s the only time I wear it. So, I, you know, I miss her, but that’s the biggest thing. I just give it all. I’m happy that she’s — I feel like she’s in a better place and, you know, I know she’s watching over,” Wourman said while wearing a white T-shirt adorned with the word “LEGACY!” printed in all caps above a picture of him and his grandmother.

Wourman has shouldered these burdens with grace, leading the Trojans to a district championship on Saturday, en route to Tuesday’s game against Holt at Grand Ledge High School. Against the Rams, the senior almost single-handedly kept his team in the game in the first half. He kept Holt in range long enough for East Lansing to storm ahead in the fourth quarter, with Wourman playing a key role in ultimately taking the lead.

“He didn’t want to go out. He didn’t want this to be his last day. So, he took it upon himself, put the team on his shoulders and carried us through,” EL Head Coach Ray Mitchell said postgame.

In EL’s three-game run through district last week, Wourman wasn’t the offensive star. He played well, but wasn’t the scoring focal point. On Tuesday, Wourman characterized his last week as a bit of a scoring “drought.”

That was in large part due to Wourman dealing with the back injury. He hurt it taking a hard fall against St. Johns in a district quarterfinal last Tuesday.

Anyone who’s dealt with back pain knows it’s omnipresent, and there is seldom, if ever, complete or even partial relief. And this is a lesson Wourman learned over the last week.

He felt well enough to play against DeWitt last Thursday, and helped the Trojans gut out a win in overtime. His back flared up, but Mitchell gave Wourman the day off from practice last Friday to let him rest before playing Waverly last Saturday for a district title.

The Trojans won, with Wourman playing critical minutes. But it appeared to be a pyrrhic victory — Wourman’s back was never worse than it was following the win against the Warriors.

“I couldn’t move in my sleep. I couldn’t turn, things like that. It was — it hurt when I was walking,” Wourman said. “It was a nine out of 10. I was thankful to have somebody come in and work with me on Sunday” to help with rehab.

With concerted rehabilitation efforts prior to Tuesday evening, and four pieces of well-placed tape on his back, Wourman was ready.

East Lansing needed him, too, relying on the senior to keep pace scoring with Holt in the first half. The senior guard scored 13 of the Trojans 23 first half points, and, thanks to Wourman, the Rams led only 24-23 at halftime.

“The biggest thing for me was going out just like the first couple games of the season, being more aggressive and starting it off,” Wourman said about looking to score early. “Because if I started off slow, obviously they [my teammates] will follow me. So, if I start off slow, we may start off slow.”

Though Wourman didn’t score the majority of East Lansing’s second half points — they needed a more balanced scoring effort to win the game — he was involved in the key run that put the Trojans up for good.

With 4:02 left in the game, Holt made two free throws to bring the score to 50-48, in favor of the Trojans. The Rams had steadily kept EL at bay until, in the beginning of the fourth quarter, the Trojans recaptured the lead. Now Holt was clawing back.

But in the next 48 second, EL scored six-straight points, nabbed a handful of steals, and buried the Rams. Wourman scored in transition and assisted on another score during that spree.

By the time Holt called a timeout with 3:14 to go, the Trojans led 56-48, and the smattering of East Lansing fans were whooping and cheering. When the referee blew his whistle to stop play, the Trojans bench players ran out on the court and mobbed the five players in the game.

After the game, Mitchell credited Wourman with leading this team to Tuesday’s game, and for leading the comeback win.

“Everybody recognizes he’s a hard worker and they see what level he has got himself to,” Mitchell said. “Everyone else is trying to strive and get to that same level. It just sets the tone for the whole program.”

Once Mitchell finished speaking with reporters, it was Wourman’s turn.

He talked about his leadership role, both season long and within the game. He recounted his travails with his back injury, and noted he’ll be fine for Thursday’s regional title game against Coldwater.

And, with a maturity that exceeded his high school age, he shared how he’s carrying the memory of his late grandmother. He’ll get to put on that pregame chain one more time.

Just leading his team to a regional final this season would have sufficed as a successful senior campaign in Wourman’s four-year career, impressive enough in its own right.

But knowing that Wourman did just that with a less-than-functional back, and understanding the emotional weight he’s placed upon himself, makes it just that little bit more remarkable.

Find all of Gary Caldwell’s photos for ELi from this game here! You are welcome to download and share the images. Just remember to credit “Gary Caldwell for ELi.”

More than 1,000 donors make it possible for ELi to bring you the news. Join them by supporting ELi today!