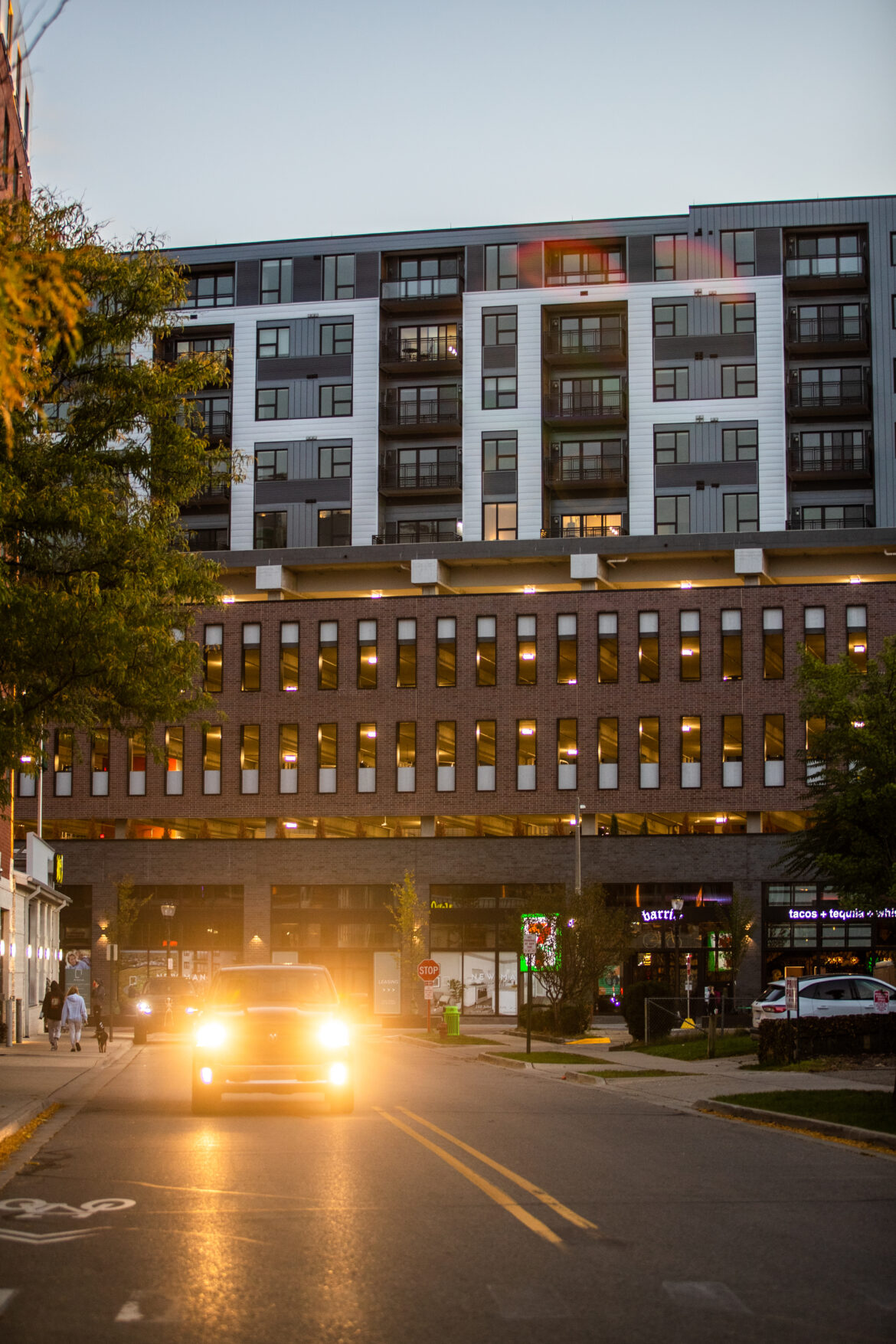 The Center City District project seen from the north, with Newman Lofts on top of the new parking garage, and retail on the ground floor.

At the recommendation of City staff, on Tuesday East Lansing’s City Council will consider amending the Master Development Agreement for the Center City District project in order to formally allow for the three units being illegally rented to people under age 55 at Newman Lofts. If passed as presented, the illegal rentals will continue as long as the tenants feel like staying.

This proposal has not left everybody happy.

Former mayor Mark Meadows is calling the proposed change “suspicious,” and advocates for seniors are asking why the developers have been allowed to break the agreements made when, in 2017, Council gave the developers the right, in a no-bid process, to build private property on publicly-owned land for a discounted price and with millions in public subsidies.

Council members who voted for the project have said they would never have signed the deal without that 55+ age rental restriction on Newman Lofts.

The developers are Harbor Bay Real Estate and Ballein Management, operating as “HB BM.” And while City staff say this proposed amendment to the Master Development Agreement (MDA) with HB BM will clarify the legal situation, several attorneys who have looked at the wording for ELi say that the amendment actually muddies the waters.

What City staff are suggesting Council vote to approve also contains no acknowledgement that the developers have done anything inappropriate. The proposed amended agreement says the City won’t assess against the developers any “penalties, fines, fees or other liabilities…with respect to the Under 55 Tenants during the current lease term or any renewals by the [same] Under 55 Tenants.”

The City agrees, in the proposed language, that the developers are not admitting liability or fault or any wrongdoing. “The Developer specifically disclaims and denies” any liability or “engaging in any wrongful or unlawful activity.”

In Meadows’ reading, “What this ‘clarification’ does is simply give up the rights of the City as to the violation of the MDA and the zoning code. The City gets nothing in return other than taking this violation off today’s plate. That does not take a change to the MDA to accomplish so this change is very suspicious.”

Meadows says, “I am surprised that any council, but especially one with three seats up for reelection in 9 months, wants to go on record letting a landlord off the hook.” Those are the seats of Council members Aaron Stephens, Dana Watson, and Ron Bacon. While Stephens has said he won’t run again, Watson and Bacon may be seeking election.

From Meadows’ point of view, “Council could at least get some sort of penalty payment to do this. It is not like the City does not need the money.”

Under East Lansing law, this zoning violation for these three apartments could result in yearly fines of over a hundred thousand dollars in total. But, as noted, the proposed MDA amendment disallows any fines.

Could the building fill up with MSU students?

Before this proposed change to the MDA, the City’s consistent position seemed to be that residents of Newman Lofts apartments had to be age 55 and higher. The proposed MDA amendment says, however, that in the future the apartments “will be leased only to residential tenants who include at least one person 55 years of age or older.” Nothing requires that the apartment be the primary residence of that one age-55+ person.

If that’s the developers’ and City’s “clarified” understanding, some believe the developers could allow parents of MSU students to sign leases for a family’s “second residence” at Newman Lofts and let the adult children live there year-round, effectively creating what is chiefly a student rental apartment.

An existing law in East Lansing, Ordinance 1384, would seem to currently prevent that. Under the 2016 law, which applies to Center City, when a big new downtown housing project is constructed, “at least 25% of the housing [units must be] owner occupied, restricted to residents 55 and older, restricted to low to moderate income housing or restricted to some other occupancy that would add diversity to the area.” (Boldfaced added.)

But different lawyers read that differently. Which is one reason, many say, the amendment to the Master Development Agreement ought to be done much more carefully than is proposed.

How did Newman Lofts become age 55+ rental housing in the first place?

Starting in 2017, under legal agreements with the City and with Ordinance 1384 in place, the developers HB BM built the Center City District project. They constructed The Landmark on Grand River Ave. – a student-attracting apartment building – and Newman Lofts, rental apartments for people age 55+.

The apartments at Newman Lofts aren’t cheap; when you include parking and utilities, the small units go for just under $2,000 per month. The bigger units cost more.

The developers said, before the deal was signed, they had market studies to prove that Newman Lofts would be viable as a 55+ rental project. But, according to Meadows, the developers started trying to get out of the 55+ restriction even before Newman Lofts opened.

Then, when the pandemic hit, Harbor Bay’s representatives claimed that covid-19 made the project not viable.

When that didn’t get them out of the age restriction, the developers threatened to sue the City, wrote letters rattling the tenants at Newman Lofts, and spending considerable resources to attack ELi for reporting on the matter.

When all that still didn’t work to turn the tide, the developers asked for special accommodation, suggesting that if Council held them to the zoning law, the illegal tenants would be the ones to suffer through eviction.

Now, a proposed amendment to the MDA is coming before Council.

What are the implications of allowing the illegal rentals to go without penalty, and to go on indefinitely?

Meadows thinks this will have an impact on how future rental violations are handled around town: “This will come back to haunt the Council when the next overoccupancy comes up.”

Among Council members asked to respond to Meadows, only Mayor Pro Tem Gregg did. Gregg said, “The purpose of the amendment is to clarify that allowing the 3 [apartments of] under 55 residents to remain does not equate to permission to rent to other under 55 residents in the future.”

Gregg says she does not share Meadows’ concerns about enforcement of other cases of rental violations. She correctly notes that Newman Loft is the first case of violation under that section of Ordinance 1384, and she says that other types of rental violations “have been enforced for decades and are widely understood by property owners.”

More than Council will decide this matter.

DDA and BRA Chair Peter Dewan told ELi, “I am interested in hearing from the City Attorney and staff on how this amendment to the MDA resolves anything or creates more questions.”

Said Dewan, “It appears to me there is a much broader conversation that needs to be addressed.” He worries, for example, about a couple aged 60 and 50 who rent only to have the 60-year-old die. Would the survivor be evicted? Meadows agrees with this concern and says it could be addressed in a revised legal agreement – but right now, it isn’t.

Dewan also wants to make sure there is collaboration “to lease vacant units.  A building that is under-utilized and has low occupancy levels is not helpful to the City, the developer, downtown businesses or our community. It is a problem for everyone, not just the developer.”

Seniors are also weighing in.

East Lansing’s Age Friendly Communities committee, which focuses on the needs of senior citizens, wrote to Council in December to object to the way Newman Lofts was being managed by the developers. Representing Newman Lofts, Betty Nocera wrote back, suggesting that the committee just doesn’t get what “active living” looks like.

At last Thursday’s meeting of the Age Friendly Communities committee, Nocera suggested that the Center City District developers might now be looking at lowering the rents at Newman Lofts.

She said that the developers  are doing a “market survey” to evaluate whether their rents “are properly aligned” with other senior housing in the region. She told the group that the goal of the MDA amendment is “to assure the community of East Lansing that we are fully committed to the 55-plus” housing. She also said the illegal renters are “all MSU professors or department chairs.”

In response, committee member Nell Kuhnmuench thanked Nocera but said, “It is wonderful to have a commitment to 55 and older living situations, but it is unnerving to have organizations who then tell us ‘we can’t meet our obligations.’”

She suggested the developers had done what they had to do “in order to get their foot in the door” and that “there is always an interest on the part of profit-making organizations to make as much money as quickly as they can and that oftentimes clouds or drives their judgement.”

Nocera responded that she had been an early advocate of the project and that, “When I caught wind of the motion to change the 55+ directive, back in September, I called the developers and I basically said ‘What the heck are you doing?’”

Nocera has since been hired to try to market the apartments more effectively to people age 55+.

Tuesday’s meeting will take place on Zoom. Those wishing to make comments can do so by telephone, as noted in the agenda packet.

Note: Stephens’ response to Meadows’ remarks arrived after publication of this article. You can read it here.

ELi’s reporting is made possible by our generous sponsors. Thank you!

Alice Dreger is ELi's Publisher and Executive Director. She reports chiefly on city government for ELi and also serves as ELi's lead investigative reporter. Her national bylines include the New York Times, the Washington Post, the Wall Street Journal, WIRED Magazine, and The Atlantic. Click here to read more about our staff.